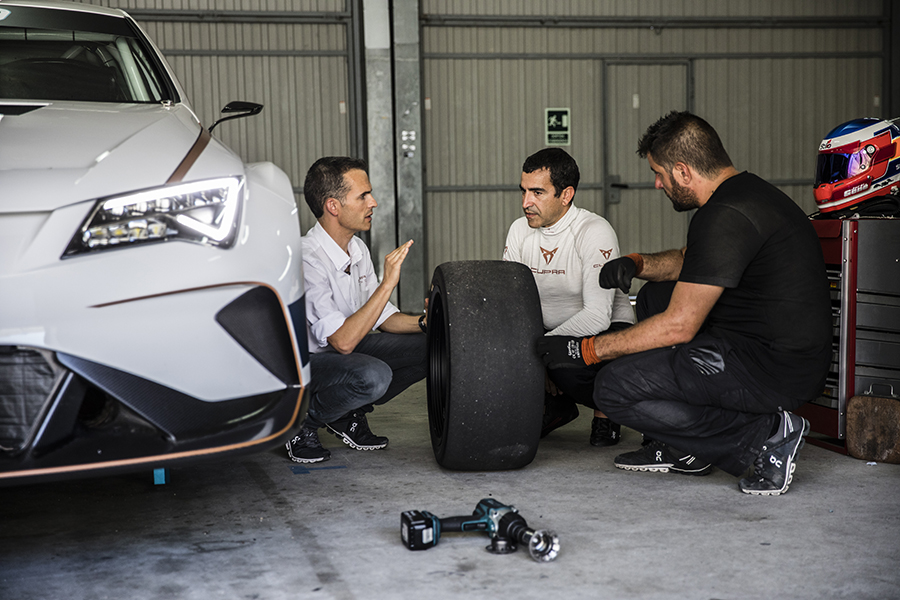 A socket, a battery weighing almost half-a-ton and 200 kilos of dry ice every day in the box at the racetrack. These are some of the features that have emerged with the rise of electric racecars, and the new models have completely changed the way racing teams do their work.
CUPRA engineer Xavier Serra, mechanic Jordi Martí and race driver Jordi Gené explain the keys of this transformation during a day of testing with the e-Racer.

With 30 years of experience, CUPRA driver and ambassador Jordi Gené admits that getting behind the wheel of an electric racecar implies “learning from scratch”.
“The driving style is completely different and now you have to use other parameters in order to know at what speed you’re driving, how to negotiate a corner or the right time to apply the brake. Heavier weight and different sound change the references received by a driver while driving. The feeling of acceleration is much more forceful, as the e-Racer is capable to reach 100 km/h in 3.2 seconds, and the adrenaline rush is even bigger.”

During one of the laps, an indicator displays a warning that the driver has to pit to cool the battery. Cooling it down with dry ice is one of the mechanics’ jobs, while the engineers have to deal with new strategies.
“It’s not just about being the fastest; now we have another factor to consider: energy management. We must learn how to monitor the temperature and the range,” explains team leader Xavier Serra. “In this respect, positioning the 450-kilo battery was one of the biggest challenges we had to face when developing the e-Racer. The team had to distribute the volume of the battery underneath the car in order to maintain its balance and functionality.”

“After working for more than 20 years in this profession I never would have thought I could plug a racecar and charge it,” says Jordi Martí. “Even the tools we use are different. Now we have a set of specially designed instruments to withstand high voltage, such as gloves made with insulating material that can resist up to 1,000 volts.”

“The arrival of electric vehicles to racing marks the beginning of a new era,” Serra concludes. “Being part of the team that has developed the first ever electric Touring Car is like being part of an historic moment”, says Martí.
“It’s a very interesting professional challenge,” Gené echoes.