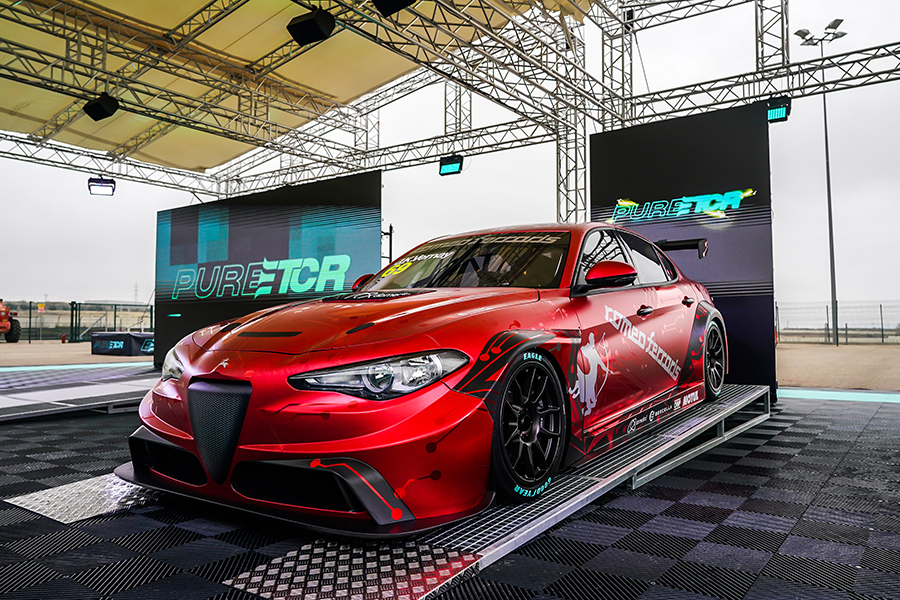 The stunning new Alfa Romeo Giulia ETCR by Romeo Ferraris that will contest the inaugural PURE ETCR season in 2021 has been given its world reveal by the Italian squad.
The all-new race car was unveiled at Motorland Aragón, Spain, by Romeo Ferraris Operations Manager Michela Cerruti and driver Jean-Karl Vernay.
The Giulia will race in a magnificent ‘Romeo Ferraris red’ livery that echoes some of the 69 major title successes won in motorsports and powerboat racing by the Milan-based team since its creation in 1959.
With an electrifying ‘circuit board’ design that looks towards a future in electric motorsport, the car is sure to be popular with fans in PURE ETCR’s inaugural race season in 2021.
The Giulia is the third car built to WSC’s ETCR concept to be revealed, joining the CUPRA e-Racer and the Hyundai Veloster N ETCR.
Like its rivals, the Alfa Romeo Guilia ETCR by Romeo Ferraris derives its 500kW peak power - the equivalent of 670bhp - from the ETCR powetrain including Williams Advanced Engineering battery, Magelec inverters and gearbox and BrightLoop DC to DC converters.
A six-event schedule is planned for the inaugural season of PURE ETCR, the world’s first all-electric, multi-brand, touring car series in 2021 with four events in Europe and two overseas.

Michela Cerruti, Romeo Ferraris Operations Manager, said: “We are very happy to be launching this new project, stemming from the hard work initiated one year ago, when we decided to embark on this new journey that marks our debut in the world of electric car racing. Aragón will be an important event for us because we will officially launch this new programme, which adds to the many that are being carried on by Romeo Ferraris, like the Fat Five, the Alfa Romeo Giulietta TCR, and the addition of Morgan to our portfolio of street-car brands. All these projects confirm the growth of our company and our confidence in taking up new challenges despite the difficulties faced in a difficult year such as 2020."

Marcello Lotti, WSC President, said: “It’s always a thrilling moment when a new race car breaks cover, but the unveiling of the Giulia ETCR by Romeo Ferraris at Motorland Aragón is something very special, because it associates a famous name and its glorious history of successes in touring cars with this innovative project that is ETCR. So far, we had only seen drawings and renderings, but to look at the car in the ‘flesh’, here in the paddock gives me the shiver, because it’s absolutely gorgeous. Now I can’t wait to see it running and I’m confident that with the expertise of the Romeo Ferraris staff it will be competitive from the very beginning.”

Xavier Gavory, PURE ETCR Series Director, said: “We’re delighted to see the Alfa Romeo Giulia ETCR by Romeo Ferraris revealed. Romeo Ferraris has such a huge tradition in motorsport with so many championship successes and race wins over more than six decades and has made a huge commitment to PURE ETCR by entering the series. It’s nice to see both the team’s history and its future represented in the livery. PURE ETCR already has some big momentum going into 2021 and this only adds to it.”