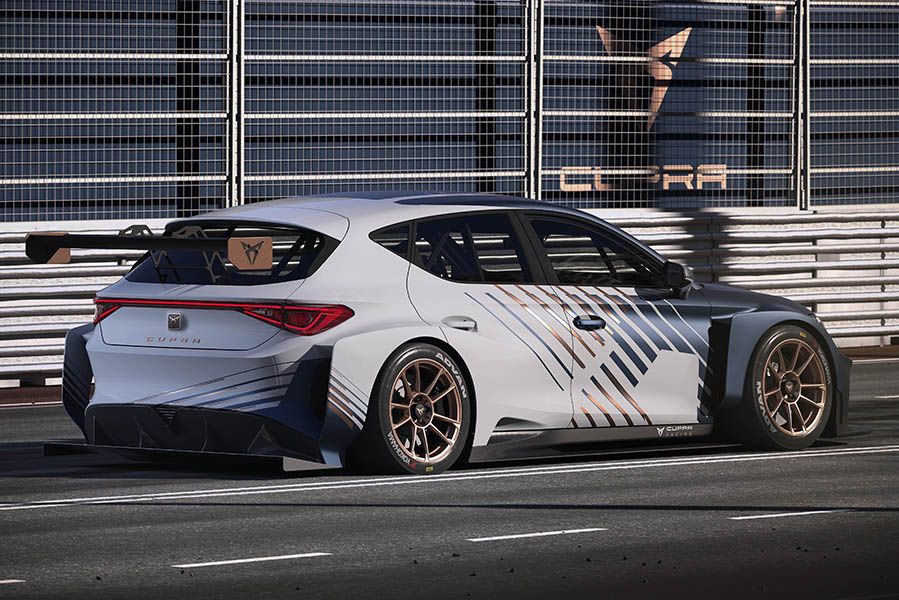 Combine performance and electrification with efficiency and sustainability. That was the challenge of the CUPRA team when designing and developing the model for ETCR, the multi-brand 100% electric touring car category. The result is the CUPRA e-Racer, which is now ready to conquer the racetracks.
Like its predecessor, the e-Racer was developed from the CUPRA Leon. The latest generation of the passenger car features a more streamlined design than ever before, which has helped the engineers at CUPRA Racing to develop a more dynamic and powerful race car that can reach 270 km/h.

“The chassis is completely new, as it is based on the platform of the new Leon, which is 50 millimetres longer and has a more efficient standard design. The floorpan and moving parts of the body are strictly standard features. The bumpers, door-sills, wings and spoiler are all newly designed. In addition, aerodynamic elements such as the front splitter have been added,” explains Xavi Serra, the head of Technical Development at CUPRA Racing.

Several elements have been reconfigured to compensate for the extended 50 millimetres of the CUPRA Leon on which the e-Racer is based as well as the new battery protection structure. “We’ve taken a step forward in safety, as we’ve worked on improving the battery’s resistance to impact and intrusion,” says Serra. “We have optimised the weight of many of the components. Internally, the bodywork features significant changes to install the battery and other electrical components. Not only has the safety arc been reinforced from a racing point of view, we have also worked with new components to achieve a better level of rigidity and torsion.”

Within an innovative design there are 4 engines that accelerate the electric race car to 100 km/h in just 3.2 seconds. With this power, which it achieves with a single gear, the new e-Racer is ready for ETCR competition.