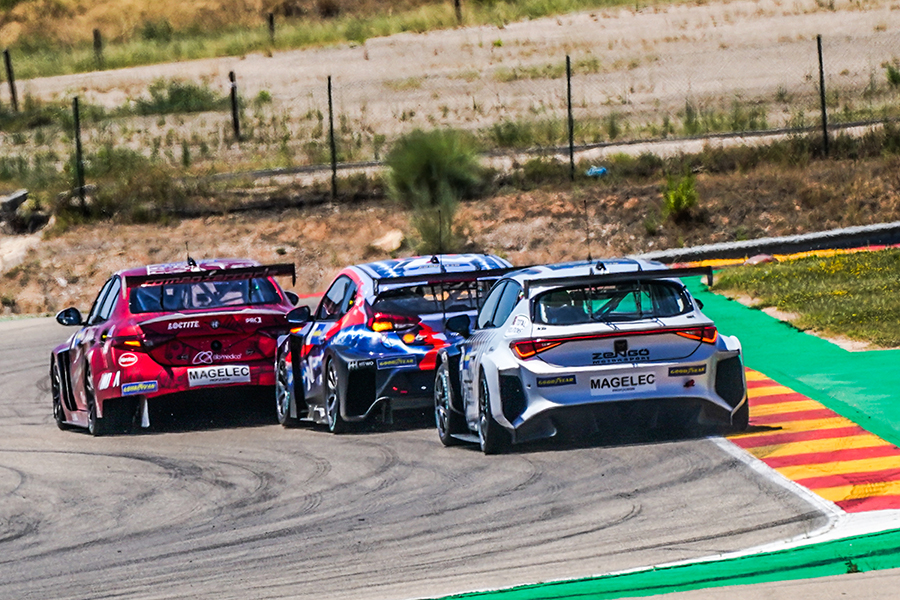 The first day of the PURE ETCR at MotorLand Aragón was all about round 1 battles, with the drivers using 300kW of power for 5 laps around the 2.6km track.
Rodrigo Baptista in the Romeo Ferraris-M1RA Giulia and Mikel Azcona with the Zengő Motorsport CUPRA e-Racer were victorious in the Pool A.
Baptista completed a superb performance in a breath-taking Battle 1. The race’s most thrilling moment came at the beginning of the last lap, when Jordi Gene’s CUPRA made contact with Tom Chilton’s Hyundai Veloster N along the pit straight. Baptista was quick to take the most out of the situation passing Chilton and using the aspiration to pip Gené on the finish line by 51 thousandths of a second.
In Battle 2, Azcona made perfect use of the power-up to beat Augusto Farfus’ Hyundai at the end of a fight that saw the two drivers running abreast for most of the two final laps. Farfus had led from the start, closely chased by Azcona, while Stefano Coletti and his Giulia soon lost contact and finished a distant third.
Following charging time at the Energy Station, Pool B began with Mattias Ekström’s CUPRA winning Battle 1, while John Filippi’s Hyundai claimed win in Battle 2.
In the first Battle, Dániel Nagy had the best getaway from the gates but in lap 2 he lost the lead to Ekström who benefited from the fight between his Hungarian teammate and Jean-Karl Vernay to build a small margin. Vernay overtook Nagy in lap 3 and then closed the gap to Ekström but the Swede’s CUPRA took the flag a one-tenth of a second before Vernay’s Hyundai.
John Filippi recovered from a slow start in Battle 2 and began chasing the two Giulia cars of Luca Filippi and Oliver Webb that swapped positions a couple of times. The Frenchman passed Webb in lap 3 and Luca Filippi in lap 4, and then managed to resist a last gasp attack from the two Alfa Romeo drivers, beating Luca Filippi by four tenths.
Action will resume tomorrow morning with the second rounds of the Battles, followed by the Time Trial, a single timed lap for each driver using the maximum power of 500kw that will determine the starting position for the two Final races that will be run on the distance of 7 laps.