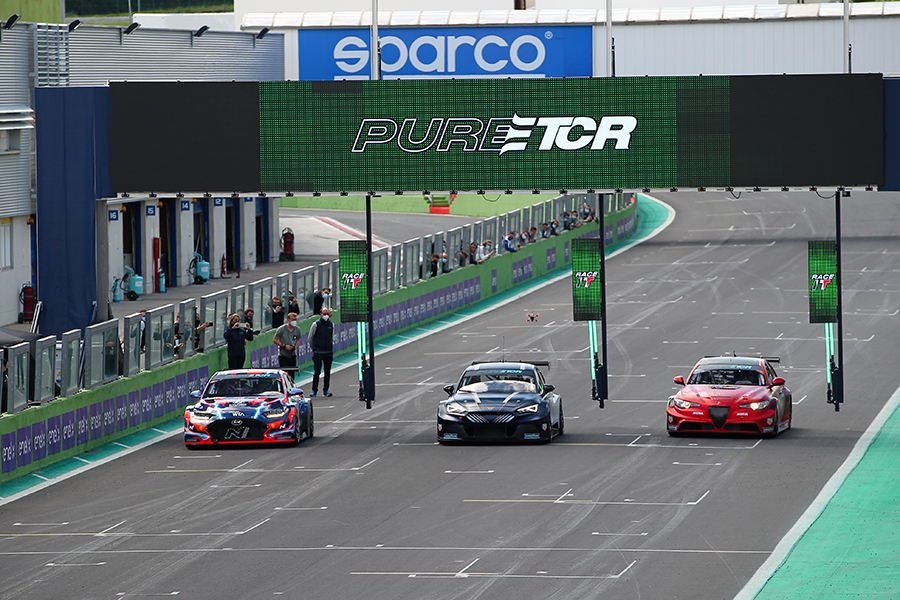 PURE ETCR’s preparations for the world’s first all-electric, multi-brand touring car series took a major step forwards this week with the successful completion of a pre-season ‘stress test’ at Vallelunga.
The test simulated key elements of a PURE ETCR race weekend, including ‘Battle’ races, weekend recharging procedures and other operational elements.
Race simulations were completed using the Starting Gate, at which every PURE ETCR Battle will commence in place of traditional starting lights, and the series’ push-to-pass system was also trialled in a multi-car scenario.
The Energy Station - heart of the PURE ETCR paddock - made its operational debut with cars being recharged in situ throughout the day via the structure combining hydrogen generators and chargers.
Hyundai Motorsport was represented by race drivers Augusto Farfus, Jean-Karl Vernay and John Filippi while Stefano Coletti was the sole competitor taking part for Romeo Ferraris. CUPRA Racing split driving duties between Mattias Ekström, Jordi Gené and Mikel Azcona.

Xavier Gavory, PURE ETCR Series Director, said: “It was a very intensive day for everyone involved and is the culmination of a lot of hard work by our organisation team as well as our partners, suppliers and competitors. It was paramount to have this run-through to validate the processes we’ve planned - many of which are extremely innovative. To see cars from all three of our manufacturers released from the Starting Gate and constantly overtaking each-other in intense battle simulation was a very satisfying moment.”

WSC President, Marcello Lotti, said: “We have been really pleased with this test, as we saw that the work we have done so far was validated at Vallelunga. We will continue to fine-tune every detail, of course, but the innovative event format created by Eurosport Events will definitely entertain and thrill the fans once we hit the track for real in June. The test showed that performance of the different cars is comparable, which we know will lead to thrilling wheel-to-wheel racing. With the technical success of this 'stress test' we are convinced, yet further, that we are working with some very professional and creative people with the mission of developing electric vehicle technologies for motorsport."