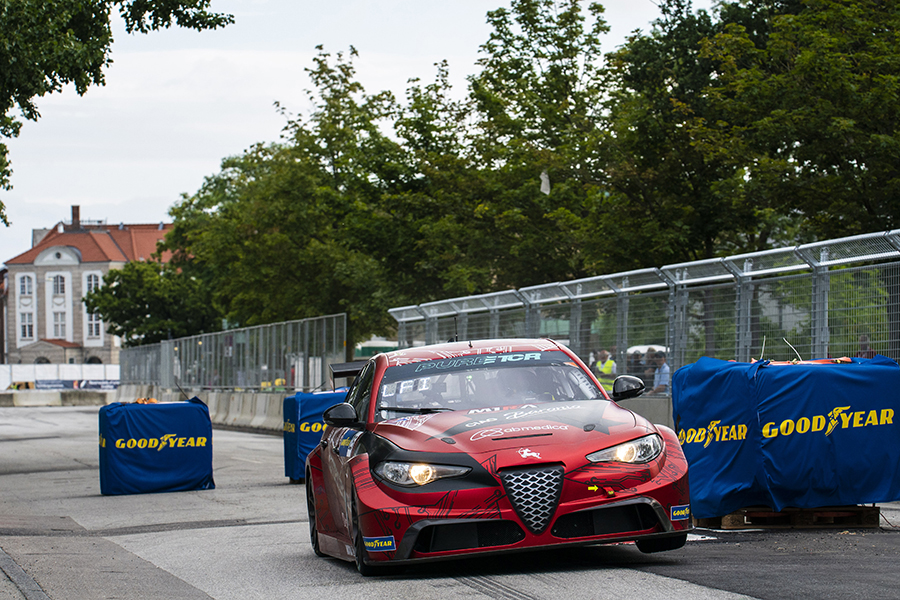 PURE ETCR’s Danish weekend turned into a complete triumph for the Romeo Ferraris M1RA team, as Phillip Eng and Luca Filippi shared victories in the Super Finals, scoring the first wins of the Giulia ETCR. On his first appearance in the series, the Austrian driver was also crowned King of the Event ahead of his Italian teammate.
At the start of the Pool A race, Mattias Ekström and Luca Fillippi ran abreast into Turn 1; the Swede who had the pole took the inside line and managed to keep the Italian at bay. Behind them, Jean-Karl Vernay passed Oliver Webb for P3.
For the rest of the 6-lap race, Ekström led, while Filippi stubbornly defended the second position from Vernay. At the end of the final lap, however, Filippi came faster off the chicane, squeezed his Giulia between Ekström’s CUPRA and the wall and beat him on the finish line by one tenth of a second.
The Pool B race was far less lively, as everything was decided at the start, when Eng made good use of his pole position to keep Tom Chilton behind. The CUPRA pair of Jordi Gené and Mikel Azcona followed, with Rodrigo Baptista fifth and Augusto Farfus sixth after a poor start from P4 on the grid.
The race became processional and Eng built a small gap despite Chilton’s efforts not to lose contact, until a puncture stopped the Hyundai during the penultimate lap. Eng won by two seconds ahead of Gené who beat Azcona by three tenths.
Ekström has retained the lead in the standings, 34 points ahead of Vernay, with Gené third, 19 points behind the Frenchman.
The fourth round of PURE ETCR will take place at the Hungaroring, on August 20/22.