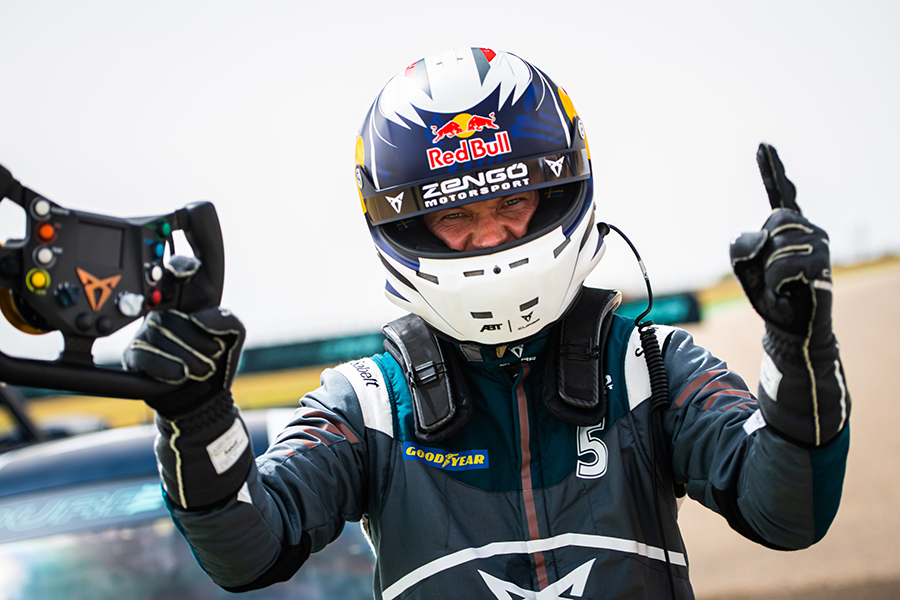 CUPRA driver Mattias Ekström recovered after an incident to secure the title in the PURE ETCR inaugural season, beating Hyundai’s Jean-Karl Vernay by only four points, while his teammate Mikel Azcona completed the championship podium.
In the final event at Pau-Arnos, the Hyundai Veloster N cars won both the Super Finals, with Augusto Farfus victorious in the Pool A and Vernay in the Pool B.
Farfus made good use of the pole in the Pool A race and led from Dániel Nagy, while Luca Fillipi moved up to third ahead of Oliver Webb and John Filippi pipped Azcona for P5.
Azcona was raring to recover and attacked John Filippi during the first lap; their cars clashed into the chicane and Azcona got the worst of it, remaining behind with damage to the front fender. The Spaniard didn’t give up, made another attempt in the second lap, and managed to pass Filippi; after that he began to close the gap to Webb.
In lap three, Nagy was defending the second place from Luca Filippi who was able to pass him into the chicane, climbing to second. In lap 5, Azcona passed Webb for P4 and one lap later his teammate Nagy opened the door and let him through to P3.
This is the way the race finished, with Farfus taking his second victory of the season from Luca Filippi and Azcona, while Nagy retained the fourth place, beating Webb and John Filippi by inches.
The second race began with a drama as pole sitter Ekström and Phillip Eng made contact after the start. Ekström’s CUPRA spun on the gravel and cut across the track while the other cars missed to collect it by inches. Both Ekström and Eng limped to the pits, but only the Swede rejoined after the team had changed the left rear tyre.
Vernay led the race ahead of Tom Chilton, knowing that with Ekström fifth he had no chances to take the title. The race did not deliver any other thrilling moments, as Vernay won from Chilton, while Rodrigo Baptista resisted a late assault from Jordi Gené to finish third. Ekström was classified fifth, one lap behind, which was enough to grab the champion’s crown.