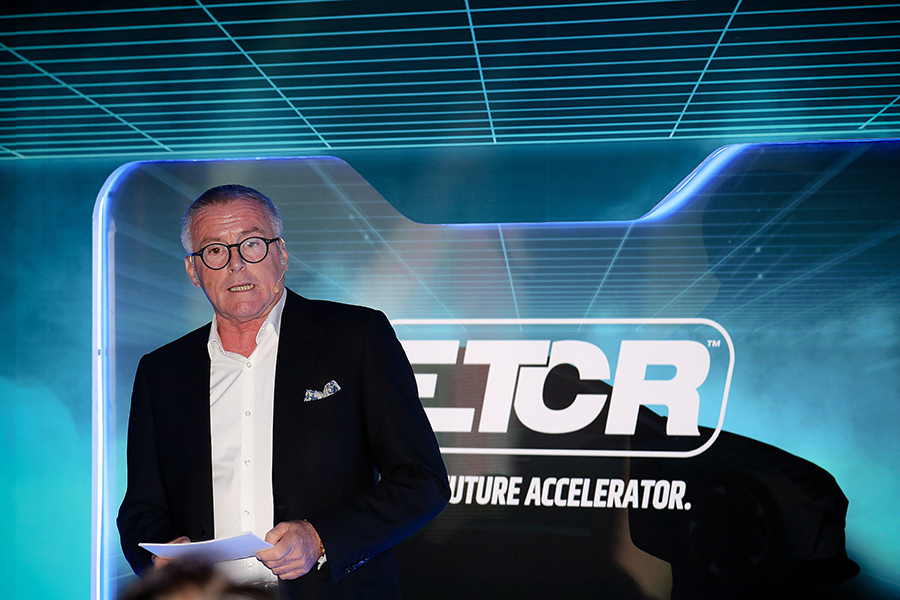 After a long planning period, the ETCR is entering its final phase. Following the PURE ETCR launch in Paris, the official tests are about to begin and they will be followed by the first on-track events.
Marcello Lotti, president of the WSC Group, the mastermind behind the first multi-brand Touring Car series for electric-powered vehicles, explains all about this new concept.

18 months after the launch in Barcelona, ETCR competition is about to begin. Would you like to summarize how ETCR has progressed from its inception to the racing phase?
“Actually, nearly 30 months have gone by since the idea was born. Our company, that already had a long-standing experience in motorsport and specifically in Touring Cars, couldn’t ignore the new trend towards alternative energies that is already having an impact on the whole automotive world.
Today car manufacturers are in the process of readdressing their efforts towards cleaner mobility and for many of them this is being reflected in their motorsport activities as well. It’s an irreversible process and we are working to make Touring Car competition one of the pillars of this future of motorsport.
In October of 2018 in Barcelona, we unveiled the first prototype that had already been through several test sessions. That was the beginning of the operative phase, when we entered into details of the technical regulations. We stuck to the original concept, but with the aim of building racing cars that could be run by customer teams as well. Our main goal was to retain the principle that had already made TCR successful, meaning that ETCR cars must be run at affordable costs to compete in regional and national series as well.
We have finalized all this and the ETCR kit is being successfully integrated. We are now ready for the fine-tuning through the official tests that will begin in the next couple of months.”

How can ETCR fit into motorsport and amongst the many racing series that are being launched to promote new and cleaner energies?
“Our company’s attitude has always been one of delivering what we have announced. This was proved once again during the launch of the ETCR concept 18 months ago, when we were able to show the first two racing cars; one was on static exhibition, but the other was perfectly running. I don’t say this to distinguish ourselves from other companies, but just to point out the fact that, for us, it is important to break cover only when we are actually ready, even if this involves lots of resources allocated for technical development.
Today there are lots of projects on paper for new electric motorsport series, but for the time being the only reality is Formula E that has its own character and is reserved for single seaters. We have a different approach, bringing into the arena Touring Cars that come from the production lines. These – Formula E and ETCR – are the only global players in the field now. We expect others will come, following the trend indicated by the manufacturers, and I think there’s enough space for us all.”

WSC Group has gathered a bunch of prestigious partners and suppliers around ETCR; how much this will benefit the category?
“We have worked hard to associate our programme with the companies that are leaders in their respective branches of activities. This is because we wanted to be sure that – with the help of their expertise – we would be able to deliver a product up to our highest expectations in terms of both safety and performance.
And we believe we have managed to reach this goal.”

WSC Group has granted Eurosport Events the license to organise the PURE ETCR series - just like WTCR for the TCR category. What will be role of PURE ETCR within the whole ETCR project?
“The first step in such an ambitious project is to lay solid foundations that can help to establish it for a long time to come. We just followed the successful experience that led to the global success of TCR.
Back in 2015 we launched the TCR International Series to showcase the product and help spread the concept worldwide, which eventually led to the creation of so many regional and national championships. It worked fine and the International Series was finally replaced by the WTCR that continued its mission thanks to the efforts put in by Eurosport Events.
As we wanted to follow the same path and establish a World Series to launch ETCR on a global scale, it was the logical choice to license the rights to Eurosport Events, a strong media partner that has the potential to promote it the way we wish, placing PURE ETCR on the top of the ETCR pyramid we are building.”

Eurosport Events has presented an innovative format for the PURE ETCR events. What is your opinion on this?
“I have to say that I like the idea. There are so many new features in their proposal, but they are all aimed towards promoting competition on the track. And this is the most important thing, because our project is all about motorsport.
Their event concept is innovative and I’m sure that when the actual competition will begin – and this is going to happen soon – it will deliver exciting battles, and the fans will love it.
I fully support the PURE ETCR format, although this will not showcase all of the ETCR cars’ potential. In fact, I want to point out that together with our technical suppliers we have worked to deliver a product that can last for sprint races having the same distance as TCR’s. But there will be occasions to show this.”

So, just like WTCR & TCR, PURE ETCR will form the peak of the ETCR pyramid. How this will be built?
“Now we have PURE ETCR, that is the icing on the cake, but we are already working on building the rest of the pyramid. We are currently receiving requests from several promoters, most of them already involved in TCR activities, who want to organise ETCR events in their own countries. We are all well aware that compared to a normal race meeting for thermal-engined cars, ETCR – like all the events for electric vehicles – requires a different approach in a lot of aspects, such as safety regulations, preparation of the track, staff formation and so on. Which is the reason why we don’t want to rush; on the contrary, we adopt a scrupulous approach in the diffusion of the regional and nationals series.
In the beginning we will give priority to those regions that are of special interest for the manufacturers; in this respect, considering the promoters that have already signed a commitment, our ideal timeline includes launching ETCR series in North America, Asia and Northern Europe from 2022. We will announce the first deals from September this year.”

ETCR cars will provide stunning performance; will this be enough to convince motorsport enthusiasts that a cleaner motorsport is possible and exciting?
“We must educate the fans and let them understand that exciting motorsport competition is possible with these new technologies and I am very confident this will happen. The ETCR cars’ looks and performance are even superior than those of the thermal-engined Touring Cars. If people think that the engine sound makes the difference, they are wrong; the sound of electric motors is definitely different, but sends a thrill up the spine. I believe that with their huge power, lightning acceleration, skidding out of the corners and the inevitable contact while fighting, the ETCR cars will deliver an exciting show.
I’m also convinced that, having already built a huge global community of millions of TCR fans, we are in a privileged position and can count on a hard core of enthusiasts who will be following ETCR with the same passion.”

One concern around ETCR is that it may be a very expensive category. Is this true?
“We have the experience we grew with TCR. Since the sales of racing cars began at the end of 2014, the price has been increased by less than 10% in five years and that was mainly due to inflation.
We have adopted the same approach for ETCR. Obviously everything depends on the racing cars’ selling price. We are sure that the ongoing technical development of these new technologies will quickly optimize the performance of all components and – as a consequence – their price as well.
Our aim is to announce in the second half of this year a selling price-cap that will be cost effective for customer teams. This is what we are currently working on together with our suppliers and the car manufacturer and the engineering companies that have already committed.”