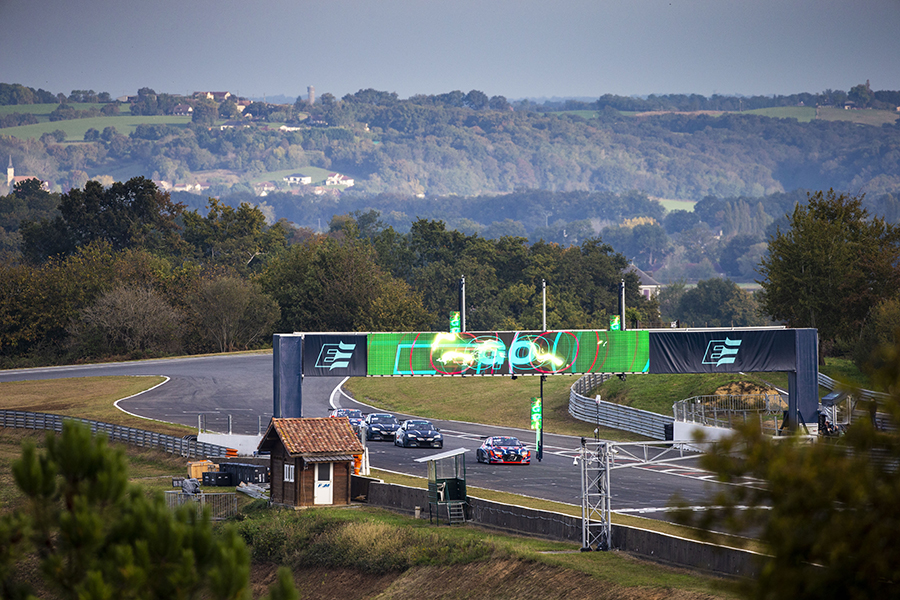 The first day of the PURE ETCR season finale at Pau-Arnos was about Round 1 battles: 4-lap races at 300kw that were won by Mikel Azcona and Augusto Farfus for Pool A, and by Mattias Ekström and Jordi Gené for Pool B.
Azcona stalled at the start of the first race, while John Filippi overtook Dániel Nagy into the chicane to take the lead. Azcona followed Filippi to get ahead of Nagy, then closed the gap and finally passed the Frenchman at the end of lap 3, winning by 2.2 seconds.
In the following race, Luca Filippi led from Oliver Webb at the start, but Farfus overtook Webb before the end of the first lap and began chasing the leader. In lap 2, Farfus locked up into the chicane and narrowly avoided t-boning Filippi’s car. During the last lap, Farfus took to the inside of Filippi, their cars made contact and Filippi spun. Webb took the opportunity to jump into the lead, but Farfus passed him and took the win with a slim margin of three tenths.
The first Battle for Pool B saw Ekström beating Jean-Karl Vernay in the run to T1; Phillip Eng benefited from the situation and passed Vernay for P2. They continued fighting for the rest of the race, which gave Ekström the chance to pull away. The fight for second was decided in the last lap, when Vernay managed to pass Eng.
In the final race of the day, Gené took a great start and led from Tom Chilton and Rodrigo Baptista. The Spaniard created a gap, while his pursuers were having a close fight that saw Baptista overtaking Chilton at the end of the third lap to finish second.
These results meant that Ekström leads the standings with a margin of 32 points over Vernay, with Azcona in third position, three further points behind, when 62 points remain for grasp over the next two days. According to the figures, the fourth-placed Jordi Gené is still in contention, but with a gap of 61 points his chances are purely theoretical.
Action will resume tomorrow morning with the second round of Battles, followed by the Time Trial sessions that will determine the starting position for Sunday’s two Super Finals.