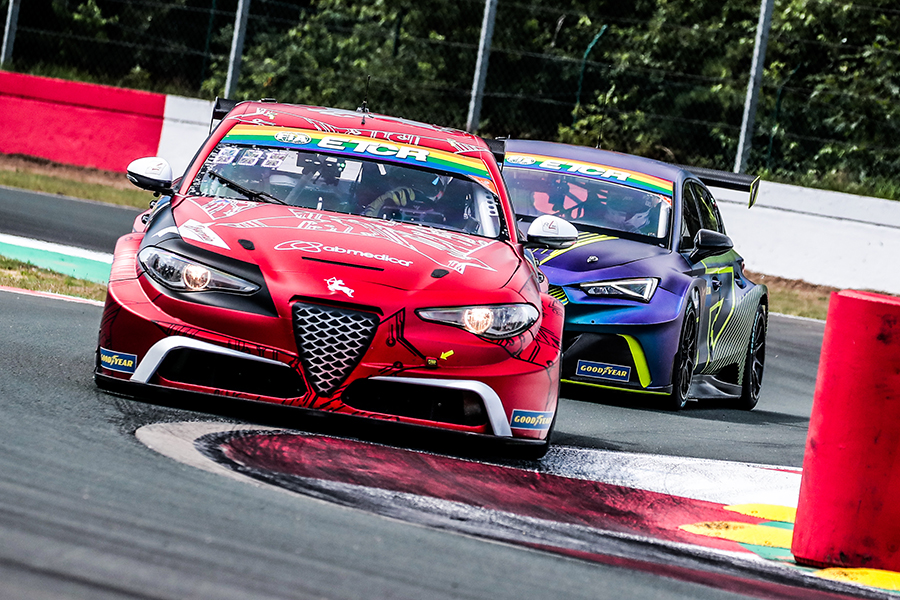 Tom Blomqvist of EKS CUPRA and Maxime Martin of Romeo Ferraris were Saturday’s stars in the FIA ETCR at Zolder. Blomqvist beat his teammate Adrien Tambay in the Quarter Final of the Pool Fast, while Martin, on his home racetrack, set the fastest lap in Qualifying and then kept Mattias Ekström at bay to win the Pool Furious Quarter Final.

However, the Swede retained the lead in the standings, nine points clear of Tambay, while Martin moved into the third position, though with a gap of 72 points.

In the Pool Furious, Martin was the only driver to break the 1:36 wall with a lap of 1:35.858 in Q2; Ekström posted the second fastest lap of the day with 1:36.146 while Luca Filippi (1:36.689) was third in the pool ahead of Nicky Catsburg (1:36.897). Jordi Gené was sidelined by a leak from the cooling system, while Mikel Azcona aborted both his laps after making mistakes.

Blomqvist scored an amazing victory in the first Quarter Final of the Pool Fast. He led after the start but then dropped to third when he was passed by Vernay and Tambay on lap 2. During the third and final lap, both Tambay and Blomqvist overtook Vernay and eventually Blomqvist pipped Tambay on the finish line by 0.075 seconds. Venturini took a comfortable win in the second race, as he seized the opportunity to take the lead at the start while Spengler and Michelisz were fighting. The two of them continued duelling for the rest of the race until Spengler passed Michelisz for P2 under the chequered flag.

The first Pool Furious Quarter Final saw Martin taking an authoritative victory; the Belgian driver started well from the pole and led from the lights to the flag, with Ekström finishing second after a vain pursuit. Filippi spoiled his chances for a better result than third when he outbraked himself at the last chicane in lap 2. Azcona won easily the second Quarter Final after starting better than the polesitter Catsburg who controlled Gené to finish second.