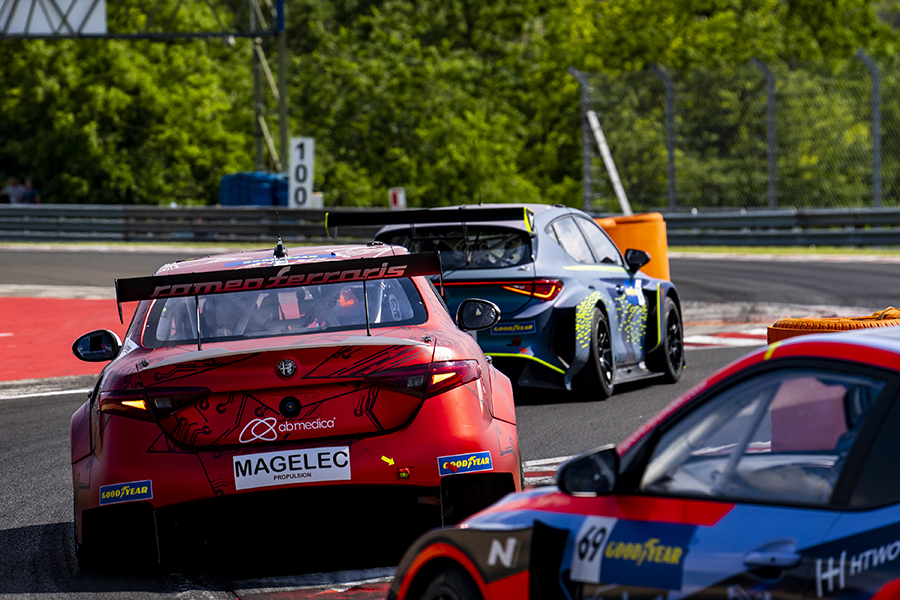 FIA ETCR Qualifying and Quarter Finals at the Hungaroring

Today at the Hungaroring, the FIA ETCR competitors ran in the Qualifying and the Quarter Finals that were won by Mattias Ekström, Maxime Martin, Bruno Spengler and Jean-Karl Vernay. The Semifinals of the Poost Fast that were expected to close the day have been postponed to tomorrow morning after the race of the European Truck Championship was suspended for long time.

In the Qualifying, Ekström topped the session of the Pool Fast with ease, posting the overall fastest lap of 1:53.442 and outpacing Mikel Azcona and Kevin Ceccon by seven and eight tenths respectively. In the Pool Furious, Adrien Tambay was fastest (1:54.793) with Spengler second, one tenth behind.

The first of the three-lap Quarter Finals saw Azcona taking the lead from Ekström after the start. The Spaniard tried his best to shake the Swedish driver’s CUPRA off, but during the last lap Ekström closed the gap and overtook Azcona in the penultimate lap, winning by 0.488 seconds. In the second race, Martin made a cautious start, but as Giovanni Venturini and Jordi Gené ran wide at Turn 1 he took the inside and pulled away. Behind him, his rival had a close battle for P2 and made contact during the second lap; eventually Venturini beat Gené to the line by three tenths.

In the Pool Furious’ first Quarter Final Spengler made a great getaway and led from Tom Blomqvist and Tambay who was slow from the pole. Tambay passed his teammate and put the pressure on Spengler. At the end of lap 2, the three cars were covered by less than five tenths. Spengler held on to the lead despite locking the brakes at T1, but Tambay was on his tail; however, as they entered into T2, Blomqvist hit the back of Tambay’s car and and sent it into a spin. In the fourth and final race, Vernay led from the lights to the flag while Luca Filippi and Norbert Michelisz had a fair fight for P2. The Hungarian passed the Italian during the first lap, but Filippi stroke back in the final lap and retook the position.