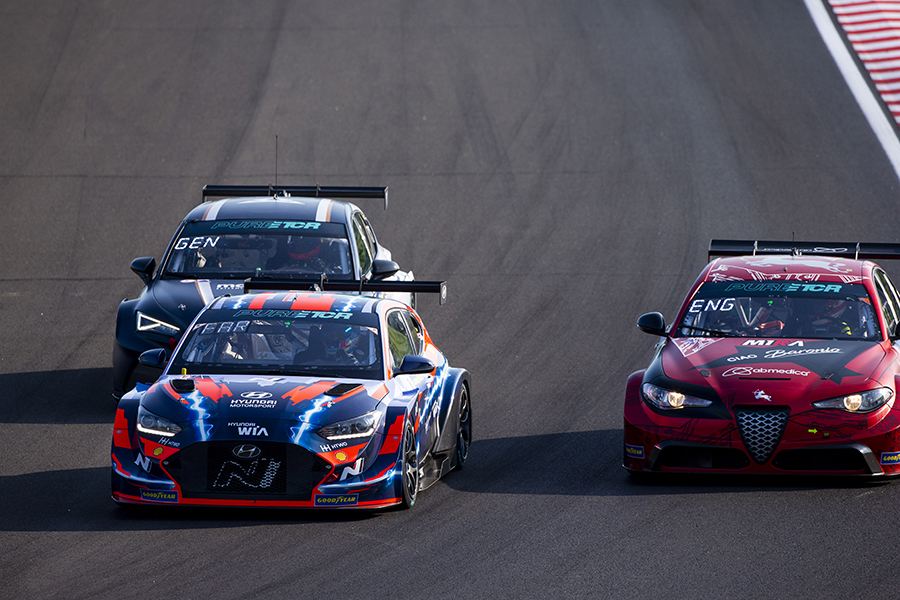 The first day of PURE ETCR at the Hungaroring resulted in some thrilling fights. The most controversial one involved Augusto Farfus and Mattias Ekström in the first battle for the second round of Pool A. Farfus won the two-lap race after him and Ekström clashed and ran wide. However, the Stewards decided to penalise the Brazilian cutting six points from his tally.
The hottest moment of the first rounds of battles was provided by Farfus and Phillip Eng in Battle 1 of Pool A as they swapped the leadership several times. Eventually Farfus won by nearly six tenths over Eng, with Jordi Gené third a further half a second behind.
Ekström took an easy victory in the second battle of Pool A, while series rookie Luigi Ferrara managed to keep John Filippi at bay to finish second. Rodrigo Baptista took a lights-to-flag win in Pool B’s first battle; behind him Dániel Nagy and Tom Chilton made contact while fighting for P2 and the Hungarian beat the English.
In the second battle, Mikel Azcona passed Jean-Karl Vernay and Luca Filippi in one move to take the lead, then resisted the attacks from Vernay and won, while his rivals made contact twice into the final turn, with Vernay crossing the line ahead of Filippi.
The second round began with a true battle between Ekström and Farfus; the Swede shut the door into the first turn to take the lead, but the Brazilian responded with a very aggressive move. The two cars clashed into the first chicane and went wide; Farfus emerged in the lead and held it until the end. The other two races of Pool A were won by Eng – easily over Ferrara – and John Filippi who claimed his maiden win resisting to Gene’s assaults.
In Pool B, Baptista led from Azcona at the start of the first battle, but the Spaniard performed a brilliant overtaking during the first lap and beat the Brazilian by seven tenths. In the other two battles, Vernay and Luca Filippi got the better of Nagy and Chilton respectively, but then Vernay was given a three second penalty for a track limit infringement at Nagy inherited the win.
In the standings, Ekström remains the leader, 23 points over Vernay.
Action will resume tomorrow morning with the Time Trial, a single timed lap for each driver with the maximum power of 500kw that will determine the starting position for the two Final races that will be run over the distance of 5 laps.