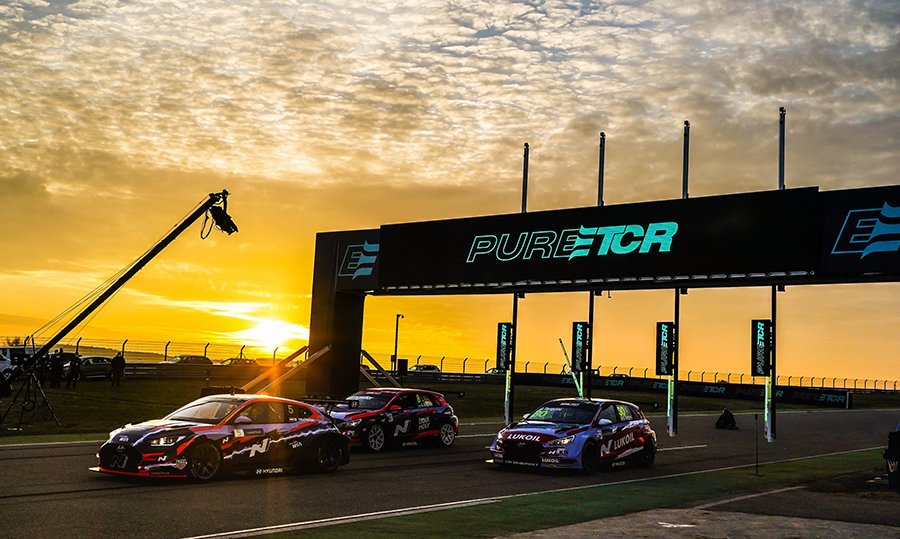 ETCR beats TCR out of the starting gate at Aragón

The acceleration of the ETCR car proved unbeatable for TCR cars in a simulation of PURE ETCR’s start at Aragón Motorland.
Eurosport Events, promoter of the upcoming new series for electric Touring Cars set up a promotional show during the season finale of the FIA WTCR. For the first time PURE ETCR’s all-new starting gate was unveiled in a thrilling demonstration that saw the Hyundai Veloster N ETCR of Norbert Michelisz sprinting ahead of the Hyundai i30 N TCR cars of Gabriele Tarquini and Luca Engstler.
The gate will be used instead of traditional starting lights when the world’s first all-electric multi-brand touring car championship kicks off in 2021. Each starting spot contains an animated LED screen presenting the driver waiting to unleash the power of their car. When the gate opens - after a random amount of time - it’s all about reaction with the fastest driver off the line getting an instant advantage over his rivals.
In the simulation that was carried out the ETCR car showcased its impressive acceleration.

“It’s really cool sitting there being three-wide with such a small gap between the cars. When the proper Battles start, I think it could be incredible action. I’m excited to see it already. The launch is then amazing too. I think it’s something that fans are going to enjoy watching a lot,” said Michelisz.