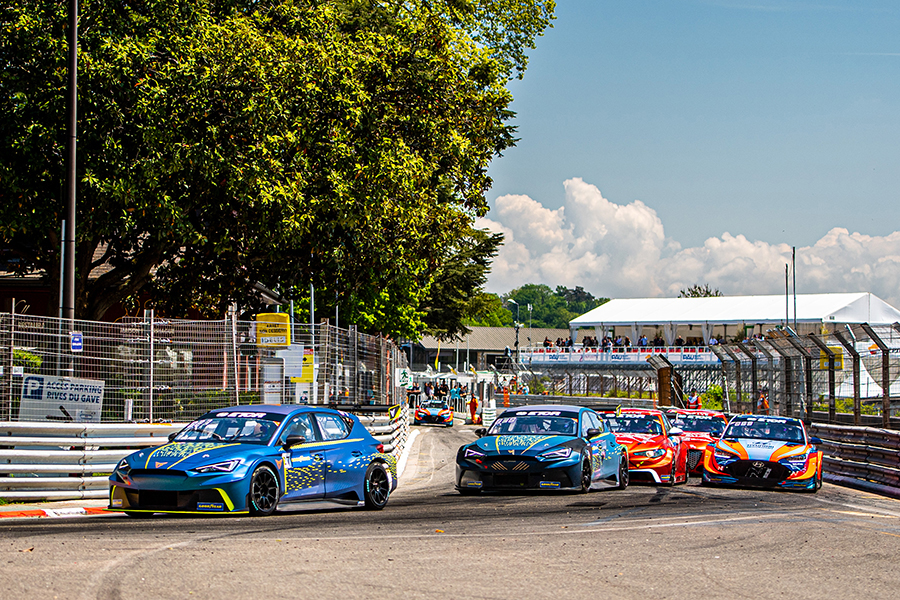 The FIA ETCR inaugural event in Pau ended with the EKS CUPRA drivers filling the top three positions of the standings. The 2021 PURE ETCR champion Mattias Ekström won the second of the Super Finals and scored the maximum of 100 points at stake in the weekend, while his new teammate Adrien Tambay took victory in the first Super Final and moved into second, eight points behind, with Tom Blomqvist in third position.

The day began with the three-lap Semi Finals. Tambay won the first of the pool Fast as he pipped Blomqvist and Romeo Ferraris’ Maxime Martin at the start. Norbert Michelisz did the same in the pool’s second Semifinal, starting faster than the other Hyundai Veloster of Jean-Karl Vernay. The latter had to fight for recovering the second place after losing it briefly to a determined Luca Filippi who had passed him at the Railway Station hairpin.

Ekström dominated the first Semi Final of the pool Furious, while Bruno Spengler and Azcona delivered an exciting fight for the second place that saw the Canadian driver beating the Spaniard after a couple of tough clashes. The start made the difference in the second Semi Final, with Giovanni Venturini securing a small advantage and proceeding to win the heat, while Jordi Gené resisted a late charge from Kevin Ceccon to retain P2.

In the pool Fast Final, Tambay made good use of the pole position and led at the start from Blomqvist and Martin. In lap 3, Michelisz and Filippi made contact while fighting for P5 and the Italian driver’s Giulia crashed into the barrier. In the following lap, Vernay passed Martin for P3, but the Belgian retook the position in lap 6. During the two final laps, Martin put the pressure on Blomqvist, but the latter was able to retain the second place.

The Final of the pool Furious saw Ekström taking a lights-to-flag victory, but the Swede had to do his very best to keep a charging Azcona behind. The Spaniard passed Ceccon for P3 during the first lap and then moved into second ahead of Spengler in lap 2. From that moment onwards he closed the gap to the leader and by the end of lap four stuck to the tail of the CUPRA. Despite all his efforts, Azcona couldn’t find a way to pass Ekström who took the flag with a 0.2-second margin.

The FIA ETCR World Cup will next move to Istanbul in two weeks.