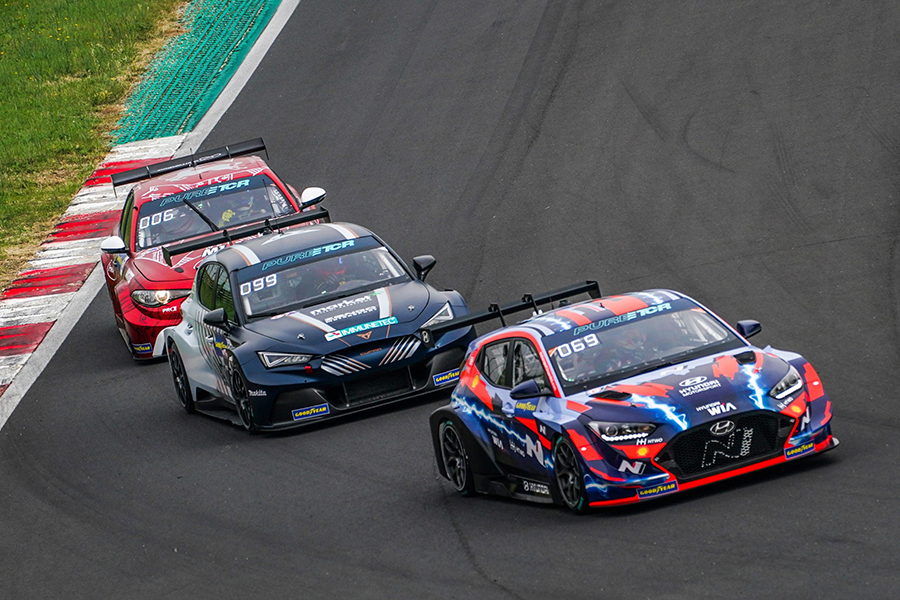 Azcona and Ekström finish on top after PURE ETCR Day 1

CUPRA fellow drivers Mikel Azcona and Mattias Ekstrõm are co-leading the standings after the first day of the inaugural PURE ETCR event at Vallelunga.
Today the twelve competitors raced in Rounds 1 and 2 on the 1.7km Club circuit, on 300kw and 450kw power respectively.
Azcona won both of his Battles in Pool A while Ekström did likewise in Pool B to leave the pair tied at the top of the standings on the maximum 27 points each.
The day also provided Battle victories for rivals Hyundai Motorsport N and Romeo Ferraris - M1RA.
Friday night’s Draw, which PURE ETCR uses to split the 12 drivers into two Pools of six, and then to set the starting order for Round 1, had placed Azcona in Pool A and in an opening Battle against Stefano Coletti of Romeo Ferraris-M1RA and Tom Chilton of Hyundai Motorsport N.
Equipped with 300kW power from his all-electric motor, plus 40 seconds of a 200kW power-up as he lined up under the Starting Gate, Azcona accelerated away well, led into the first corner on Vallelunga’s 1.7km Club Circuit and was never headed.
He was equally dominant in Round 2 - a two-car fight against the Hyundai of Augusto Farfus - who made history earlier in the day by winning the first-ever PURE ETCR Battle - with 450kW available and no Power-Up and ended the day ahead in the standings.
Following charging time at the PURE ETCR Energy Station, Pool B began with Ekström repeating Azcona’s results.
First, he beat Jean-Karl Vernay’s Hyundai Veloster N and Oliver Webb’s Giulia ETCR by Romeo Ferraris in Round 1 and then Webb’s team-mate Luca Filippi in Round 2.
That put the Swede at the head of the Pool B standings, ahead of Vernay - who won his Round 2 Battle against Daniel Nagy - and Luca Filippi.
Action will resume tomorrow morning with the Time Trial, a single timed lap on the maximum power of 500kw for each driver on the 3.2km Iayout of the Roman circuit that will determine the starting position for the two Final races that will be raced on the distance of 8 laps.