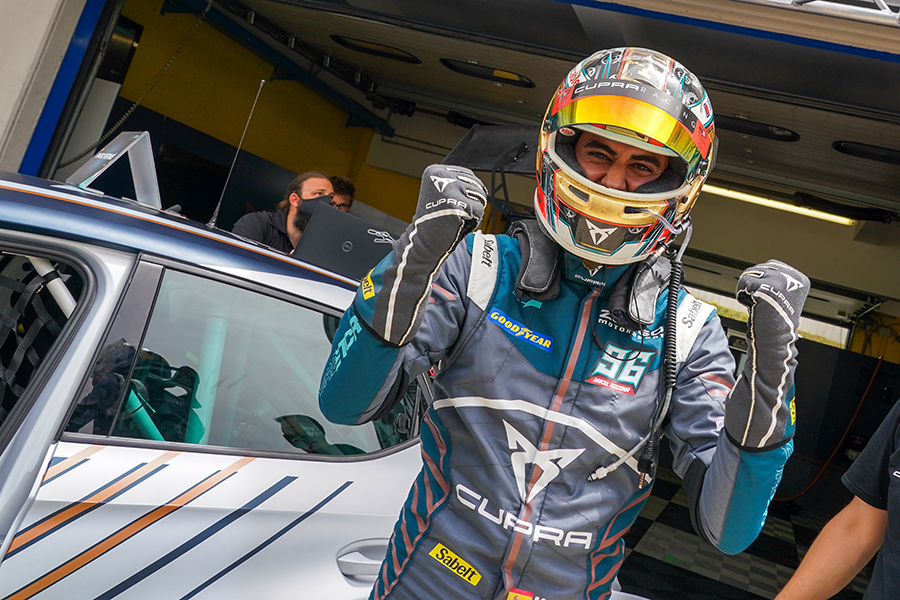 Mikel Azcona and CUPRA made Touring Car history today in Vallelunga as they were the winners of the inaugural event of the PURE ETCR series.
And yet, the day had not started well for the young Spaniard who spun off during his Time Trial lap with a flat rear tyre. This meant he would start from the back of the six-car field for the Pool A Final, with the Hyundai Veloster N of Augusto Farfus on pole position.
No better luck had Azcona’s teammate Mattias Ekström, who was disqualified after the Time Trial for Pool B due to a parc fermé infringement. As a consequence, the Swede was also relegated at the back of the grid for the Pool B Final.
Farfus led the first Final from his Hyundai Motorsport teammate Tom Chilton, while Azcona elbowed his way up to P3. Chilton’s Veloster N was forced out with a puncture, and one lap later Farfus spun out of the lead at the hairpin. That cleared the way for Azcona to take the chequered flag and move on to 77 points for the event. Azcona’s teammate Jordi Gené made it a CUPRA one-two, while Rodrigo Baptista was the final finisher for Romeo Ferraris M1RA.
Ekström needed to win the Pool B final to tie Azcona on 77 points; the Swede charged up to second place by the half-distance. Utilising his 40 seconds of Power-Up, he set about reducing the two-second gap to the Hyundai of Jean-Karl Vernay, who had led from his pole position. He wound up just 0.781 second behind at the chequered flag, which ensured the Frenchman finished the event second overall on 72 points with Ekström third on 69.
Behind the pair there was a lively four-car scrap for third that eventually went the way of Romeo Ferraris – M1RA driver Luca Filippi who beat John Filippi, Oliver Webb and Dániel Nagy.
The second round of PURE ETCR will take place at Aragón Motorland on July 10/11.