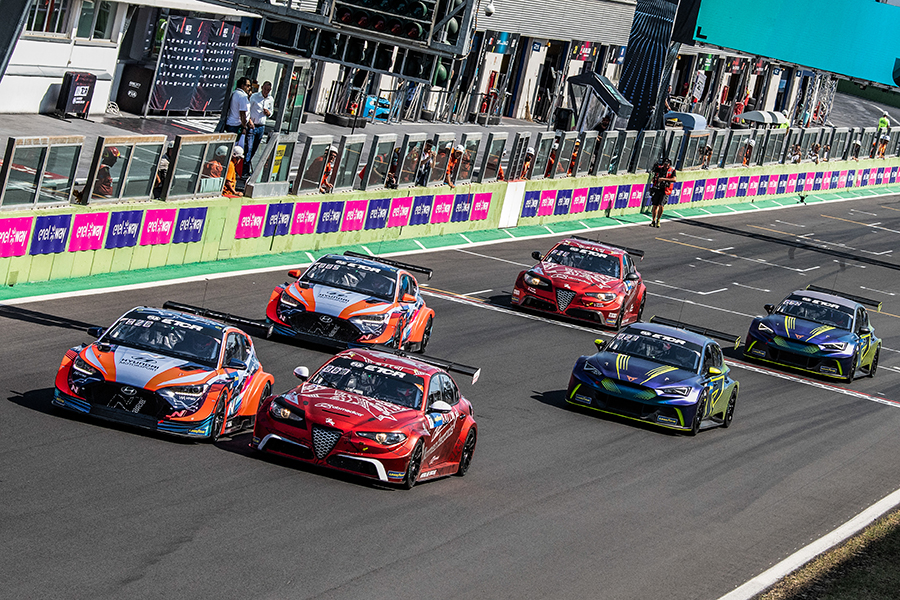 Mikel Azcona scored Hyundai’s first victory in the 2022 FIA ETCR at Vallelunga, as he won the Pool Fast Final and scored the maximum 100 point on offer during the weekend. Maxime Martin who was equal on points with Azcona after the Semifinals, did not start in the Pool Furious Final after his Romeo Ferraris teammate Bruno Spengler had crashed the Giulia car they shared in a high-speed incident during the Pool Fast Final.

In the first Semifinal of Pool Fast, Azcona fought hard to keep Spengler behind at the braking of the Cimini 1, and they made contact a couple of times while running abreast downhill. The Canadian tried to stay in touch but began to drop behind and had to fight to defend P2 from Norbert Michelisz, while Azcona lost part of the rear diffusor. In lap 4, Michelisz went straight at the chicane and had to settle for third, while Azcona beat Spengler by two seconds. The pool’s second Semi Final saw Adrien Tambay take an easy win from Luca Filippi and Jordi Gené.

Martin imitated Tambay, leading the first of the Pool Furious semifinals from the start to the chequered flag. Behind him, Nicky Catsburg muscled his way past Mattias Ekström at the chicane during the first lap and this how they finished, with Martin the winner from Catsburg who beat Ekström on the line by four tenths. The second Semifinal was less entertaining; Tom Blomqvist took the lead at the start from Jean Karl Vernay and Giovanni Venturini and there were no changes, with Venturini finishing despite a flat rear tyre.

At the start of the Pool Fast Final there was again a tough scrap between Azcona and Spengler who swapped paints going downhill towards the Cimini double bend. Azcona took the lead from Spengler, Michelisz, Tambay and Genè who passed Filippi. At the beginning of lap 3, Spengler went off at the fast Turn 1, his Giulia flying and crashing into the tyre wall with terminal damage. As the race continued, Michelisz went straight at the chicane in lap 5 with a flat rear tyre, Filippi experienced the same issue and they both limped to the end. Azcona won the race from Tambay and Gené, while Spengler was sent to the hospital for a series of medical checks.

With pole sitter Martin unable to start, Romeo Ferraris team elected to withdraw Venturini’s car due to safety concerns. Catsburg took the lead at the start ahead of Ekström, with Blomqvist defending the third place from Vernay, which is the way the stood until the final lap, when Catsburg slowed with a flat rear tyre. Ekström inherited the win from Blomqvist and Vernay.

Tambay has retained the lead in the standings, 14 points clear of Ekström, while Azcona has moved into third, with a gap of 67 points.