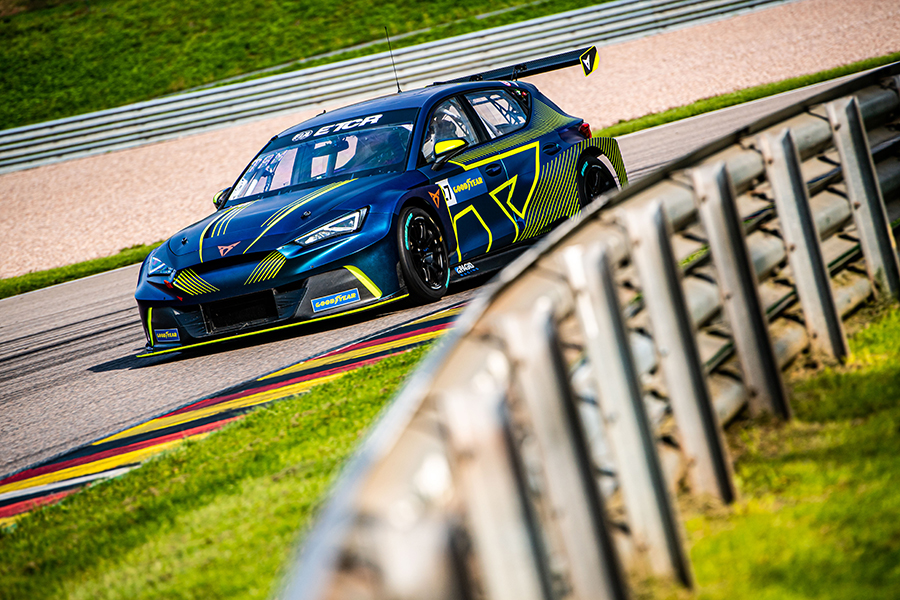 EKS CUPRA Racing drivers filled the championship podium in the inaugural season of the FIA ETCR World Cup. Tom Blomqvist and Adrien Tambay were first and second in the final event at the Sachsenring, where they both scored the maximum 100 points in their respective pools, and Tambay was crowned the first FIA ETCR champion.

Mattias Ekström finished runner-up in the standings, while Blomqvist advanced to third ahead of Romeo Ferraris’ Maxime Martin and Hyundai Motorsport’s Mikel Azcona.

Pool Fast – Blomqvist made good use of the pole to lead the first Semi Final and pulled away, while Ekström and Nicky Catsburg delivered a thrilling fight for second. For the whole four-lap race Catsburg put the pressure on Ekström, trying to find a gap. They ran abreast several times, but the Swede did not make mistakes and beat the Dutchman to the line by two tenths. In the second Semi Final, Giovanni Venturini led at the start, Jean Karl Vernay braked too late at T1, and Martin passed him for P2. At the beginning of lap 2, the Belgian took the lead from Venturini who was passed by Vernay as well. Vernay tried to close in on Martin but had to settle for second.

From the pole, Blomqvist led the Super Final ahead of Ekström and Catsburg, while Martin overtook Vernay for P4. At the end of lap 2, Catsburg and Ekström made contact and the Swede dropped to fifth behind Catsburg, Martin and Vernay. The six cars were running nose-to-tail, with Catsburg trying to steal the lead from Blomqvist, while Ekström passed Vernay and attacked Martin. Blomqvist held on to the lead and won; behind him Catsburg and Martin clashed into the final bend. Catsburg spun and Martin crossed the line in second place, 5 thousandths before Ekström.

Pool Furious – In the first Semi Final, Tambay led from the pole, while Luca Filippi muscled his way past Norbert Michelisz for second into Turn 2. The Italian driver closed the gap from Tambay and tried to pass him into Turn 1 at the beginning of the last lap but spun off onto the gravel. Tambay won by three tenths over Michelisz. Bruno Spengler led the second Semi Final from Azcona and Jordi Gené, but in lap 2, Azcona moved into P1 and opened up a gap, while Gené beat Spengler by one thousandth in the sprint for second.

Pole sitter Tambay led the Super Final at the start from Michelisz and Filippi, while Azcona was slow from P4 on the grid and dropped to last behind Spengler and Gené. At the end of lap 3, Michelisz closed the gap from the leader and began chasing Tambay, while Azcona passed Gené for P5. At the beginning of the final lap, Tambay had Michelisz and Filippi stuck on the rear bumper of his car, but he kept them at bay until the end, finishing his winning season in style.