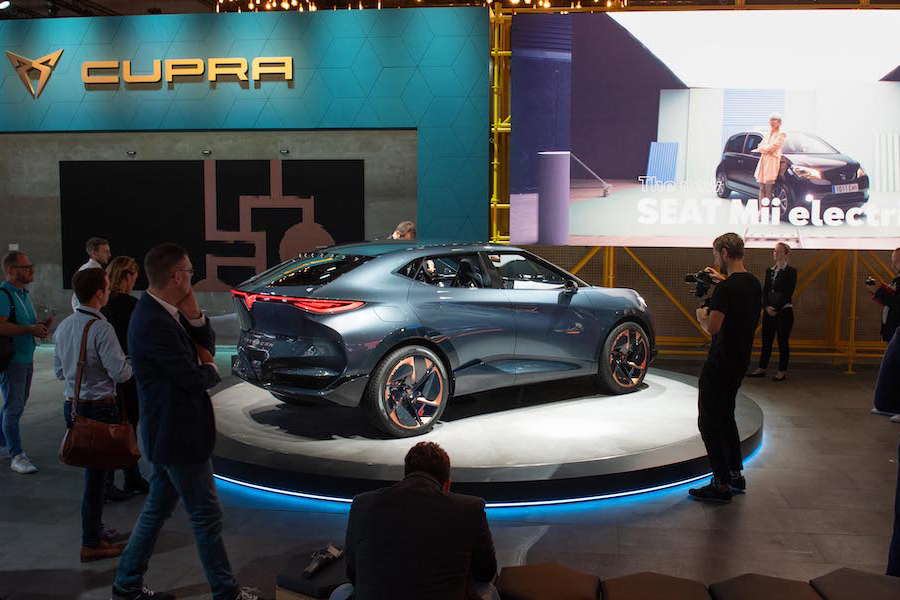 An array of new electric cars have already debuted at this year's IAA Frankfurt Motor Show, which got underway on Tuesday, ranging from road-ready hatchbacks to radical new concepts. We take a look at the most exciting releases below.

Volkswagen ID.3
Volkswagen presented its long-awaited ID.3 hatchback, the first road car in its new ID. range and the world’s first EV with a CO2-neutral footprint.
The ID.3 is Volkswagen’s third fully electric car but the first designed entirely as an EV, as it follows the e-up! and e-Golf electric versions of its existing ICE-powered models.
It will be available with three battery size options, with range between 205-341 miles, depending on specification. The 205-mile range version, with 45 kWh of useable energy, will be available for less than €30,000.
Fast-charging will enable the ID.3 to charge for a range of around 180 miles in 30 minutes, using a charging output of 100 kW. Batteries are integrated into the underbody, maintaining a low center of gravity.
A limited launch edition, named ID.3 1st, was open for pre-orders in May. It includes the mid-range 58 kWh battery, producing 150 kW (201 hp).
Three trim levels of the ID.3 1st are available, with the basic model priced at under €40,000 ($44,000). Deliveries will begin in mid-2020.
Volkswagen has also lowered the base prices of its e-up!, which will now go on sale for €21,795 ($24,000) in Germany.

Honda e
The Honda e appears to be the Volkswagen ID.3’s main competitor, also priced from around €30,000 and set for first deliveries in summer 2020.
A prototype version of the compact hatchback has been previously presented, but the final production version was revealed just ahead of the Frankfurt show.
Two versions will be available: one producing 100 kW (134 hp) and an Advance model producing 113 kW (152 hp).
Range is significantly lower than the VW, however, with a stated figure of up to 137 miles, positioning the Honda e for city driving. Fast-charging will allow for 80 percent charge in 30 minutes.
The 100 kW version will be available for €29,470 ($32,470) in Germany, with the Advance version at €32,470 ($35,770).
Deliveries will begin in summer 2020 for customers in the UK, Germany, France and Norway.
The Honda e is the brand’s first battery electric vehicle launched in Europe. Honda has pledged for 100 percent of its European sales to be at least partly electrified by 2025.

Audi AI:TRAIL quattro
Audi revealed the fourth and final vehicle in its ‘visionary’ concept range, the AI:TRAIL quattro, a fully electric off-road concept.
It follows on from the Aicon, AI:ME and AI:RACE. All four cars are on display together at the show.
The four-seater AI:TRAIL quattro has the capacity for automated driving along with off-road capabilities, with broad glass surfaces to allow occupants to fully take in their surroundings.
“With the AI:TRAIL, we are showing an off-road concept with an emissions-free electric drive for an innovative driving experience away from paved roads,” explained Marc Lichte, Audi’s head of design.
“Consistent with this, we designed a monolithic basic vehicle body with maximum glazing to create an intense connection to the surroundings. A concept for sustainable mobility on demand.”
Alongside the AI:TRAIL quattro are the luxury Aicon, designed for long-distance electric driving and the AI:RACE, which is the new name for the PB18 e-tron which debuted at Pebble Beach in 2018.
The third car in the series was the AI:ME, introduced at Auto Shanghai earlier this year as an autonomous city car aimed at megacities around the world.

Mercedes-Benz Vision EQS
The Mercedes-Benz Vision EQS is an electric luxury sedan that celebrated its world premiere at Frankfurt.
It serves as a show car to demonstrate a new fully variable electric drive platform that Mercedes-Benz says can be scalable and used across all models.
The Vision EQS concept has a range of up to 434 miles, producing 350 kW () of power, while recharging to 80 percent in under 20 minutes.
Mercedes-Benz also revealed the EQV, a fully electric premium MPV with a range of 252 miles.
"For the first time ever, we have developed our new e-platform exclusively for the requirements of mid- and full-size luxury cars to take full advantage of all the opportunities offered by this technology," said Ola Källenius, head of Mercedes-Benz Cars.
“Design must always set new benchmarks. Which is why we are once again taking a new path with the Vision EQS.
“The term here is “One-Bow Design”: One clear line is enough; one arc defines the entire form. Because we believe that Modern Luxury is not opulence – but simplification."
Mercedes-Benz has plans for a completely CO2-neutral fleet of new cars by 2039, while selling more than 50 percent of new cars with electric drivetrains by 2030.

Cupra Tavascan
SEAT revealed the Cupra Tavascan concept, the first fully electric vehicle built entirely by its performance subsidiary Cupra.
The Tavascan follows the Formentor, a hybrid that will launch next year as Cupra’s first independently developed model.
The new car was developed on Volkswagen Group’s MEB platform, combining SUV practicality with coupe design.
SEAT previously unveiled the Mii electric and el-Born models, both of which are also fully electric.
The Mii electric will be sold in 14 European countries with deliveries starting early next year, at a base price of €16,300 ($17,930) after government and brand subsidies.
“The IAA comes at a great time for us, with historic sales and financial results,” said SEAT president Luca de Meo.
“Our position enables us to remain committed to and continue investing in mobility for future generations with solutions that adapt to tomorrow.
“Electrification is a key part of this mobility, as are micromobility and the development of solutions that cater to it.”

MINI Cooper SE
MINI took its recently-unveiled Cooper SE from BMW Group’s headquarters in Munich to Frankfurt for the show with just one charging stop to demonstrate the first fully electric MINI’s range.
Project manager Elena Eder drove the prototype car on the 250-mile journey, completing one recharging stop for 35 minutes to top up the car’s battery. The Cooper SE has a range of 146-168 miles.
Production of the car will begin at the MINI plant in Oxford, UK, in November. It will go on sale in Germany for €32,500 ($35,730).
“Urban mobility is certainly the greatest strength of the MINI Cooper SE,” said Eder. “But that doesn't mean that electric driving fun is only suitable for short distances.
“The MINI Cooper SE can easily cope with lengthier journeys thanks to the option of using DC fast charging stations with a charging capacity of up to 50 kilowatts. A lunch break is all it takes to recharge.”